Carly and Eric chop up an oversize RBS card outside the RBS AGM. To the right you can make out “RBS climate criminals” stealing “public money” to destroy the environment.  Click on the photo to see more pictures.

[UPDATE: This photograph has appeared in this excellent piece by journalist Ian Fraser.]

Following the mysterious appearance of funny posters on RBS ATMs yesterday, OFR representatives joined others outside the RBS conference hall at their Gogarburn HQ today, where their AGM was being held.  The poster Carly is holding in the picture above reads:

We are all RBS shareholders.
If the UK Government won’t stop the Robber Baron Syndicate, we will!
Together we are powerful.

It’s easier than you think to:
MOVE YOUR MONEY
(& overdrafts & loans!)
See: www.moveyourmoney.org.uk

Evie with a poster condemning the RBS MoneySense programme. The incompetence of RBS contributed to the economic disaster and now RBS uses its taxpayer-funded £45-billion bail-out to invest in weapons and fossil fuels, while doing little to help small businesses, earning it a miserable Ethiscore of only 1.5/20! We say RBS is not fit to teach children, so ‘ Get out of our schools!’ See http://tiny.cc/moneynonsense Click on the picture to see more photos. 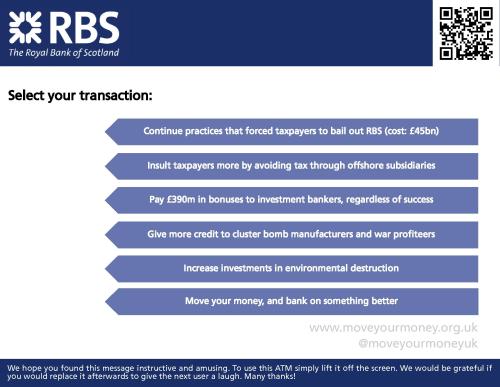 MoveYourMoney has produced this amusing poster for RBS ATMs ahead of the RBS AGM on 30 May 2012. It was based on an original design by Occupy Free Radicals. You can view a jpg version by clicking on this image, then right-click to download it.

On the eve of the Royal Bank of Scotland AGM (outside which Occupy Free Radicals and others will be protesting: RBS HQ, Gogarburn 1.30 to 2 p.m.) MoveYourMoneyUK has unveiled a humorous poster to be stuck on RBS Automatic Teller Machines. They have, with permission, based this on the Occupy Free Radicals design written about by journalist Ian Fraser.

Download a PDF of this poster here, or a JPG version here, and feel free to use it!

Why are we doing this?  Further info on RBS may be found on the Move Your Money site and here, and also see what Friends of the Earth Scotland say!

Please send MoveYourMoneyUK photographs of these posters in place on RBS ATMs!

…And here it is up close!

RBS on North Bridge, Edinburgh. An ATM here was also targeted by protesters. 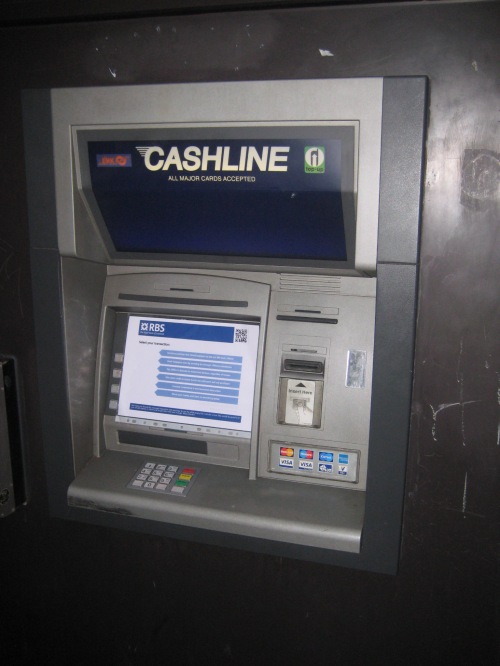 Poster on ATM at the RBS branch on North Bridge, Edinburgh.

We not only handed our flyers out, we also put them up!

The pictures speak for themselves:  OFR hit the sunny streets of Stockbridge, stationing ourselves outside the two branches of Scotmid and the local RBS branch.  While about 50% of members of the public appeared to ignore us, the other 50% took our flyers and several of these were very enthusiastic.  One lady insisted on shaking our hands.  She said, ‘So many people are passive these days.  Thank you for taking action!’ 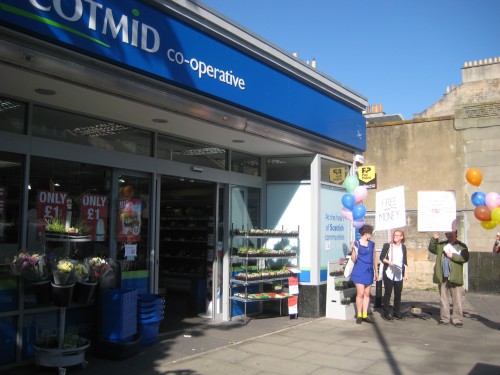 Outside Scotmid on Raeburn Place in Stockbridge – we couldn’t have asked for better weather!

We were drawing people’s attention to:

Outside the Royal Bank of Scotland on Circus Place. 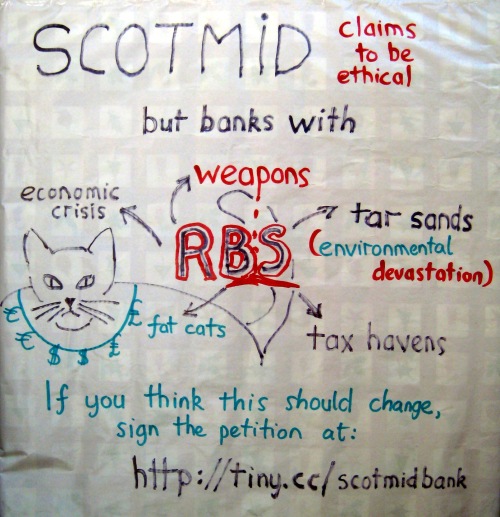 Our Scotmid poster. Click on it to learn more!

Our RBS Money(Non)Sense poster. We think it’s wrong that this highly unethical and incompetent bank is in our schools teaching children about money with its ‘MoneySense’ programme. Click on the picture to learn more.

Outside Scotmid on Hamilton Place, Stockbridge. 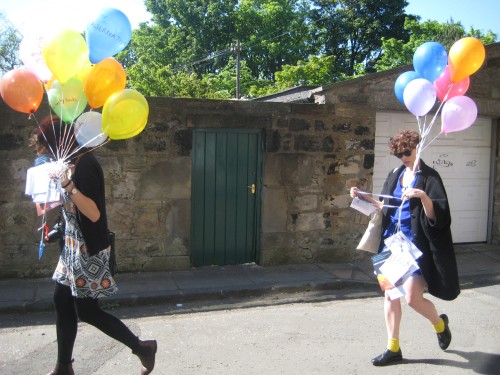 On the move! It was so warm several of the helium balloons popped in the heat.

Scotmid makes much of its ethics, yet banks with the Royal Bank of Scotland, a bank with an appalling record with respect to human rights and the environment. We are campaigning to encourage Scotmid (and other organisations and individuals) to bank ethically.

[Update: This action has now taken place, and there’s now a petition.  Please sign it!]

Once more Occupy Free Radicals will be taking to the streets to encourage people to bank ethically. This time we shall be focussing on Scotmid, an organisation that prides itself on its ethics but banks with the Royal Bank of Scotland, a bank with an Ethiscore of only 1.5 out of 20!  Amongst other things, RBS backs arms companies (including, historically, those producing cluster bombs that maim/kill many children) and the exploitation of tar sands in Canada and Madagascar (harmful to both the environment and local people). In 2011 RBS was named by the Ecologist as one the worst banks involved in financing fossil fuel companies.

Scotmid claims to be ‘At the Heart of Scottish Communities’. Are these hearts so cruel that they want Scotmid to bank with an organisation that invests in cluster bombs and wholesale environmental destruction? We want Scotmid to stop banking with RBS.

If you want to see us (or participate) then make your way to Stockbridge on the afternoon of Friday 25 May. Expect to find us outside the banks and Scotmid branches from around 3 p.m. For further details please email us!

…Not that we could possibly condone the relatively poor (most of us on the planet) using the limited means at our disposal to make people question what the super-rich want us to think of as essential to our happiness, of course. 😉

Please comment on this and let us know what advertisements could be “improved” and how!

It’s a playground: unexpected events and messages, all things surprising, strange and different! To have impact, both the content but the form of the message are important. Interest, intrigue and tease, don’t lecture. Appeal to people’s intelligence and sense of humour

Poster seen on RBS ATM. Click on the picture to see it larger (and to copy it). 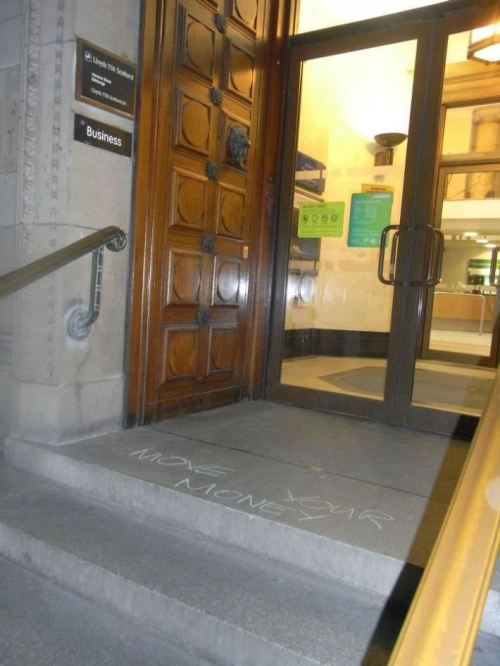 We support the Move your Money campaign, that aims to encourage people to change their banks for the better. If enough people move their money to banks that are better for them (and for the world in general), bad banks will have to reform or shut down. If your relationship with your bank is dysfunctional, leave it! Have a look at their website for all the info about why, where, when and how.

Note that an overdraft is not a barrier to moving your account!

We hit the streets with leaflets, questionnaires and a special guest:  Dave! 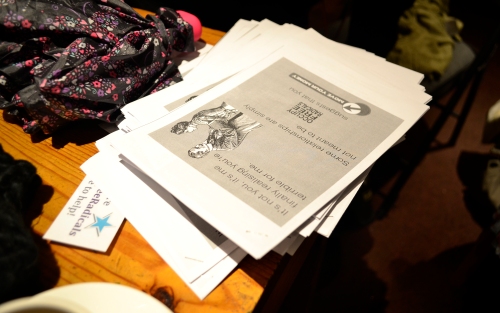 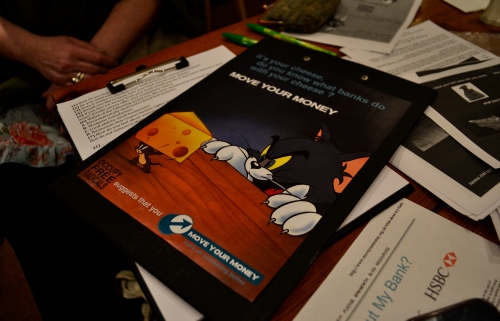